There were four main functions carried out at the Gasworks:

The Dunedin Gasworks Museum complex consists of the main pumping section of the works, together with some of the gas treatment plant. 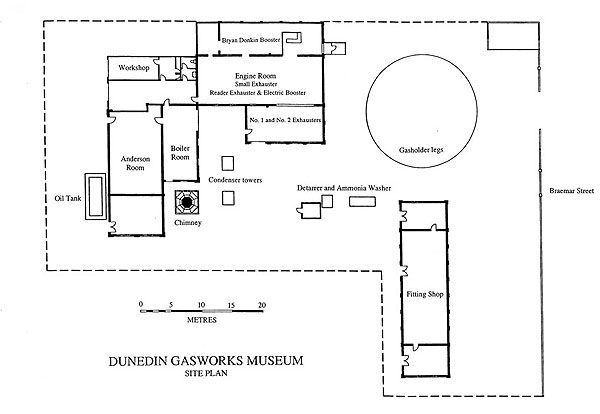 Various exhausters were used to draw gas from retorts. The gas was passed through to two condensers beside the boiler house, which cooled it down. This condensed out much of the coal tar in the gas, which was fed into storage tanks. The gas was then passed through the Tar Electrostatic Precipitator (detarrer) and the ammonia washer to remove further impurities. Finally, the gas passed through the purifiers, which removed any hydrogen sulphide that might be present. Although the main purifiers have not survived, the fitting shop was originally built to house a set of similar units for the 1900 water gas plant.

Once the gas had been fully treated, it was pumped through the Station Meter to measure the volume produced, and then stored in the gasholders. The last surviving gasholder was situated at Kensington and was demolished in 2000. To supply the city with gas, several boosters in the works yard (now gone) fed the low-pressure system during the day, generally being shut down at 11 pm, when supply was maintained by the pressure inside the gasholders. During periods of high demand, the Bryan Donkin Booster was used to supply high-pressure gas to outer areas, when outlying governors then reduced the pressure for domestic use.