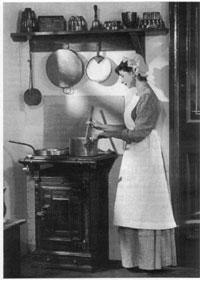 In common with other towns, gas was first produced in Dunedin for lighting, initially for the streets and then for commercial and private use. Gas stoves were shown at the 1851 Exhibition at Crystal Palace in London, but the first record of their use in Dunedin was in 1884 when a trial of gas stoves was held in the Town Hall. Ten years later a showroom was opened in the Octagon, and a series of cooking lectures presented there were well attended. However, it appears that the coal range remained dominant in Dunedin, probably due to the colder climate and the availability of coal. 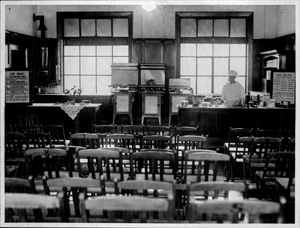 During the 1920s the popularity of gas ranges in Dunedin grew rapidly, due to a number of factors. The Gas Department vigorously promoted gas cooking, including the establishment of a permanent showroom, the appointment of a "Lady Demonstrator" to demonstrate gas cooking and the publication of a gas cookbook. At the same time, the introduction of the "regulo" thermostatic control allowed more precise control of temperature.