The original works of 1862 supplied gas for street lighting in Princes, George and Stuart Streets. 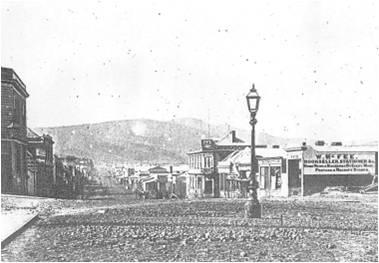 By 1977 gas was reticulated throughout the inner city and to most suburbs. At this time there were 170 miles of mains serving 18,000 customers.

Following the closure of the coal gasification plant the underground reticulation system was severely cut back, and in 2000 served only the central and northern business districts. Gas was carried from the works to customers by a system of underground mains. These pipes ranged in diameter from 18 inches at the works to 2 inches at the outskirts (45cm to 5cm). Pipes from the mains to individual houses were nor¬mally 1 inch in diameter.
Because the rate of usage at times of peak demand was greater than the rate of production in the works, it was always necessary to store gas in gasholders [often incorrectly called "gasometers"].
The pressure in the mains was regulated by the governors and maintained at peak times by boosters which pumped gas into the mains from the gasholders.

Gasholders
The gasholders stored gas produced by the works at times of low consumer demand, so that reserves were available at times of the day when consumption was high. In Britain, it was considered a good practice to have storage equal to the maximum days make in mid-winter.

Gasholder on the Dunedin Gasworks site.

The gasholder in its most basic form consisted of a hollow cylinder closed at one end, and inverted in a tank of water which formed a seal. This was supported by an iron or steel frame. Gas pumped into the holder raised the cylinder, the weight of which maintained gas pressure to the mains. The framework of the gasholder erected on the museum site was originally part of a holder constructed in 1879 which stood where the Shell Petrol Station is now. Embossed plates on the columns bear the date of erection and the name E. Genever, who was the gas engineer of the time.

Governors
On display is one of three governors formerly housed in a small building on the corner of Anderson's Bay Road and Hillside Road. The governors regulated the pressure of the gas supplied to the city by controlling valves to the three gas mains. Each governor operated like a miniature gasholder and was connected to one of the three mains. An increase in gas consumption would cause pressure in the main to drop and the governor bell to sink. This, in turn, would open the control valve, restoring the gas pressure and maintaining the supply. The required pressure could be set by the use of counterweights; adding weight lowered the set pressure.