Gas Production
There are several methods of producing what is known as "manufactured gas" or "town gas". Historically the best-known technique is coal carbonisation, but water gas production and oil gasification were also extensively used at the Dunedin Gasworks.

Coal Gas
Coal gas is produced when coal is heated in the absence of air in an enclosed chamber. When bituminous coal is heated to a temperature of about 400°C it softens and coalesces, giving off water vapour, rich gas and tar. As the temperature is raised to 1,000°C the remaining volatile matter, ultimately hydrogen, is almost entirely driven off leaving coke residue. The coal gas consists largely of hydrogen, carbon monoxide and methane. But in its raw state it also contains condensable products such as tar and ammonia which are removed in the purification process.

Retorts
Two types of retorts were used at the Dunedin Gasworks; horizontal retorts and continuous vertical retorts. The Dunedin horizontal retorts were 20 ft (6 m) long, were "D" shaped in cross section and held about 18 cwt (0.9 tonne) of coal. The horizontal retorts were opened at one end, charged with coal and heated. The coal gas was piped away for purification and supply. When the charge was exhausted the re¬tort was opened and the coke residue removed prior to the recharging of the retort. This type of system was labour intensive but could handle a wide variety of different coals. 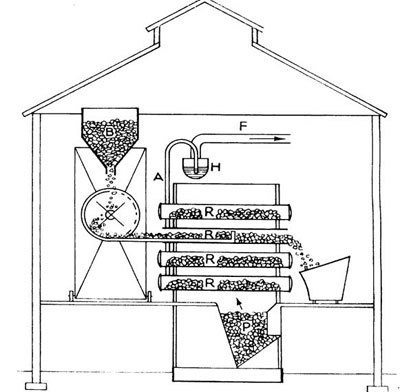 Cross section of a horizontal retort house. Coal from hopper B is fed on to belt of charging machine C which pushes the coal into retort R and repels coke from previous charge. The retorts are heated by a furnace P. Gas leaves the retorts via pipes A and bubbles through a water seal H, where some of the tar is removed. The gas is then drawn off through pipe F to the condenser and purifier plant. Source: British Gas Council

The vertical retorts (the 1927 Glover-West and the 1962 Woodall-Duckham) were continuously fed with coal at the top, the residue coke being withdrawn from the bottom. Coal gas produced without interruption. These plants were most efficient producers of gas from a given weight of feed coal, but were far more demanding of coal quality. Coal from the Strongman Mine on the West Coast was a typical feed¬stock used. The Woodall-Duckham plant with its 20 retorts, 25 ft (7m) high, was capable of carbonising 90 tons of coal per day and producing 1.6 million cubic feet (44,800 cu.m) of gas at peak production.

Carburetted Water Gas
Coke was produced in the retorts as a by-product of coal gas manufacture. It was used in part to heat the retorts, some was sold as a solid fuel, and some was used to produce water gas.
Water gas was produced in a deep brick generator filled with coke at a high temperature. Blowing air through the hot coke for about two minutes raised the temperature and made the coke incandescent whereupon the air was shut off and steam was blown through. This reacted with the coke (carbon) to produce water gas, a mixture of hydrogen and carbon monoxide. After about one and a half minutes the steam was shut off and air blown through again to reheat the coke. This air-steam cycle was maintained automatically. The water gas was then passed through a second heated brick chamber known as the Carburettor. Here light petroleum oil was sprayed onto the brickwork where it was `cracked' to produce gas which boosted the energy content of the water gas which could then be mixed with coal gas from the retorts.

Gas from Oil
An oil gasification plant worked in a similar fashion to the carburettor in a water gas plant. A light flash distillate of petroleum together with a carefully regulated amount of steam were sprayed into a hot chamber containing a nickel catalyst. Like the water gas plant it was operated in a cyclic "heat and make" manner.
Such plants became very popular while oil was cheap in the 1960s, having the added benefit of being clean to operate with no by-product disposal problem. However, the Arab Oil Crisis of 1973 pushed up the price of the light flash distillate feedstock, and severely upset the economic viability of such plants.
Dunedin had a number of such reforming units; three P3 Reforming Plants and two MS (Micro-Simplex) Reforming Plants. These were clean to run, and had the capacity to supply the entire city, but the economics of oil supply dictated that the coal carbonisation plant continued to be used. Ironically, the MS Plant was ordered only months before the oil crisis broke. In 1987, when coal carbonisation ceased in Dunedin, the MS Reforming Plant was modified to handle LPG feedstock.

Purification
Untreated gas contained tar, ammonia and other compounds that could give a wide range of by-products but were undesirable in the gas.
From the retort the gas first passed through a water seal in a collector main sometimes called the "hydraulic main". Here much of the tar separated out under the water and was piped to the tar well, while most of the ammonia in the gas was absorbed by the water. From the hydraulic main, the foul main carried the crude gas to the condensers, where it was cooled. More tar was separated here. The gas was drawn along the foul main and through the condensers by the exhausters, which also pumped the gas through the remainder of the works. The last traces of tar were removed in the adjacent electrostatic detarrer which employed high voltages to attract particles of tar. In the ammonia washer sprays of water absorbed the remaining ammonia.

Finally hydrogen sulphide was removed in the purifiers. If burnt with the gas it would lead to the formation of sulphuric acid, which is potentially damaging in any gas appli-ance. The purifiers were large cast iron boxes in which iron oxide mixed with wood shavings was supported on grids. The iron oxide combined with the hydrogen sulphide to form iron sulphide. Eventually the iron oxide would become saturated with sulphide, but it could be regenerated by blowing air through the purifier. This also produced sulphur, which eventually choked the purifier. The contents then had to be dug out and replaced with fresh iron oxide and shavings.